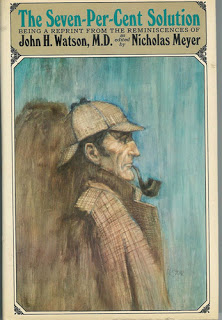 In 1974 there was a mighty publishing sea change. Whether it was the author, Nicholas Meyer, or the publisher, Dutton, I don’t know, but somebody’s idea minted gold back then and continues to do so. The Seven-Percent-Solution became a huge bestseller and was the first major modern era Sherlock Holmes pastiche since the late 1940s when H. F. Heard published the last of his Mr. Mycroft Sherlock Holmes pastiches.

When The Seven-Percent-Solution reached a public (who was desperate for a continuation of Sherlock Holmes, but did not know it yet), the novel included some innovations that have been replicated thousands of times. Speaking of which, one estimate of the number of Holmes pastiches to be published in the intervening 43 years from 1974 is roughly 10,000.

(1) Either Meyer or his editor supported the use of pseudo-front matter to increase the over-all verisimilitude of the story. To underscore that pseudo-reality, Meyer wrote a detailed Foreword (also called a “framing device”) that explained how the memoir happened to be found and how Meyer happened to arrange for its publication. This sort of front matter at root told a story of convoluted mystery and of intertwining fates, detailing why and how cause and effect, ever patient, ordained that the manuscript would be hidden, found, resurrected, and/or travel from one location to another. By its very nature, the existence of this sort of material in a novel is the epitome of irony. A reader newly approaching the book with no preconceptions couldn’t help but notice that “somebody” went to a lot of trouble to create a false provenance that seemed real but clearly was not, being, after all, affixed to a work featuring well-known clearly fictitious characters. As I said, unprecedented!

(2) Again, either Meyer or his editor chose to continue that conceit of verisimilitude by announcing on the book’s cover and also on the title page that the volume was in actuality “a reprint from the reminiscences of John H. Watson, M.D. as edited by Nicholas Meyer”, which treats Watson as an authentic human being and relegates Meyer to the subordinate role of “editor”. Again, unprecedented!

(3) Probably most importantly, Meyer had Sherlock Holmes and Dr. Watson cross paths with a true-to-life historical person—Sigmund Freud. This, too, was unprecedented.

The fallout from these machinations was huge. First off, Sherlock Holmes novels overnight became a dedicated subgenre with volume after volume being churned out. Then, at first more often than not, these novels were filled with various literary apparatus that suggested the legitimate nature of the volumes. Lastly, again, overnight, writers were falling over themselves to include in their tales contemporaneous real people of renown, such as Theodore Roosevelt, Lenin, and Jack the Ripper.  Then, of course, it was only a small logical leap to begin treating famous fictional characters as though were every bit as real as Roosevelt or Freud. Enter Fu Manchu and H.G. Wells' Martians. Unashamedly following in the shoes of Meyer, writer Loren D. Estleman did this quite well, utilizing Count Dracula and Dr. Jekyll in two Holmes crossover tales. Finally, the best of all possible framing devices, to my mind, was Italian scholar Umberto Eco’s untitled preface to his own giant blockbuster 1980 Sherlockian pastiche, The Name of the Rose.

"Holmes Behind the Veil" Trilogy

The Backstory of The Sussex Beekeeper